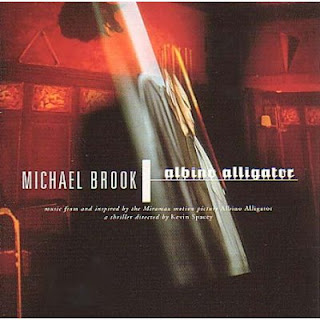 Albino Alligator
Over the past twenty-five years, Michael Brook has forged his own path, fueled in equal parts by scientific curiosity, the thrill of playing guitar, technical prowess and a fervent interest in music from all over the world. His creative energies and expertise have been tapped over the years by those who recognize Michael as, variously: a record producer; a soundtrack composer; an instrument builder; an inspired collaborator and player; and a solo artist possessed of a unique sensibility.

This is the 1997 soundtrack for a Kevin Spacey directed neo-noir thriller. Brook's work here turns into an interesting blend of his own style and smoky late night jazz interspersed with a variety of other instrumental touches.. It stays with you long after you've forgotten everything about the film. His work is all above par, and this is no exception.