Morricone Youth Original Re-Score for The Adventures of Prince Achmed 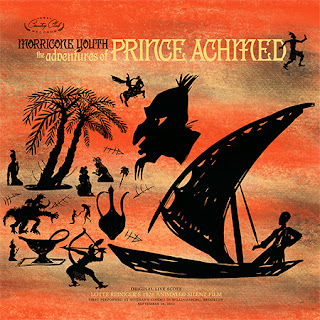 NYC-based band Morricone Youth have recently released their new album, The Adventures of Prince Achmed, the oldest surviving animated film, via Country Club records and Light In the Attic.

Morricone Youth was formed in 1999 with a mission statement to compose, re-interpret, perform and record "music written for the moving image." The Adventures of Prince Achmed was written for Lotte Reiniger’s 1926 classic and the oldest known surviving feature film of the same name. This original re-score is a powerful and bewitching excursion through Mid-Eastern exotica, twangin' surf guitar, dub heavy afro-funk and Ethiopiques. It features concertmaster violinist Conrad Harris of FLUX Quartet and String Noise (Northern Spy). This release is the second (following September’s Night of the Living Dead) in a series of a 15 LP/EP vinyl series that coincides with each midnight movie/silent film for which Morricone Youth has written original music and live scored over the past five years at various movie theaters around NYC.

The album is available for preview and streaming HERE at Soundcloud

Over the years, the band has released a number of CD's of re-interpretations of obscure soundtrack music from the past as well as a score to an "imaginary film" entitled "Silenzio Violento," recorded and mixed by legendary engineer Martin Bisi (Sonic Youth, Swans, Dresden Dolls), toured and had residencies at the Knitting Factory, CBGB, Tonic and, most recently, Nitehawk Cinema in Williamsburg. Brooklyn Academy of Music (BAM) asked the band to compose and perform an original score to Hitchcock's "The Lodger" on Halloween 2013 and the band performed a improvised "chance" piece of reinterpreted French film music dictated by a live chess match between chess masters at the Philadelphia Museum of Art (PMOA) in connection with its Marcel Duchamp exhibit in 2012. Band members have scored for documentaries and short films and Morricone Youth's original music has been used in documentaries and television programs.