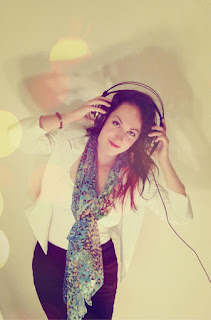 Kristin Royal is a composer/musician whose unique talent is taking top 40 songs and remixing them in her own special style by using elements and themes from soundtracks in what she calls "cinematic remixes".  She lists her hometown as "America".

Using Lindsey Sterling and Piano Guys as inspiration, Kristin has created several mixes "with an adventurous soundtrack spin, bridging the gap between today's hits and yesterday's orchestra." Each is done in a different soundtrack style (typical western, jazzy Gershwin, etc.) She has also remixed with an artist in Utah, Robyn Cage, keeping her vocals while composing a middle-eastern "Hidalgo" style soundtrack to accompany. This is included on Robyn's new album "Born in the Desert" (CD released Oct. 2nd, 2015).

As an avid soundtrack collector and aficionado, I was very impressed listening to these remixes as they convey a sense of space and time, and conjure up images of beautiful places and people I have met to create a "widescreen" vision in my head. Each subsequent listen then adds to this by forming a new "scene" as if a continuation of a story. Composers like Lisa Gerrard, James Horner and Ennio Morricone come to mind when hearing these. Not being all that familiar with top 40 songs myself, these mixes sound refreshing and work as individual pieces in their own right.

Below are YouTube videos of 4 of Kristin's creations and her notes on the thought process and inspiration behind each one.

Burning Now: I recently fell in love with Robyn Cage's powerful song, "Burning Now." Her music video was especially great and the beautiful scenes of the Utah desert inspired my exotic desert style remix of her song. I contacted her to see if she'd be interested in letting me remix her song. When I took it in the James Newton Howard "Hidalgo" desert direction, she loved it (probably because it starts off with a Duduk) and told me her upcoming album was actually called "Born in the Desert."

Rather Be: This was the first cinematic remix I wrote. I wanted to capture the excitement of love that "Rather Be" expresses with the full spectrum of the orchestra, using the contrast of a love peaceful and simple, to love's fullest complex passionate splendor. I did not have a specific composer that I drew inspiration from, but I drew upon the expressive music from spectacle events such as the Olympics, Theme Parks, and Cirque du Soleil shows. Like these events, love can be spectacular!


Shake It Off: Originally known for her country, I thought it would be fun to turn Taylor Swift's recent pop hit "Shake It Off" back in the opposite direction and make it extremely country. So I made it the Wild West! After drawing on the inspiration of James Horner's "An American Tail: Fievel Goes West," I tried to include some typical soundtrack elements that show up in westerns such as: cowboys, outlaws, the calvary, railroad expansion, handcarts, big wagons, wild horses, native americans, the fiddle, pioneers, big wide landscapes (like the iconic Utah/New Mexico desert lands,)etc. I hope you have fun picking out everything!
*There is also a special audio Easter Egg hidden in the song. (This sound is a staple used in westerns films and video games of all kinds, so I had to use it.)

Uptown Funk: At first I was nervous to take on "Uptown Funk" because it's such a lively, funky song, and I am a classically trained French Horn player. (Not saying we can't get funky every now and then, it's just not our natural state.) Mixing my classical tastes with Bruno Mars was challenging, but exciting! I drew upon Michael Giacchino and his great use of brass and jazz in "The Incredibles."