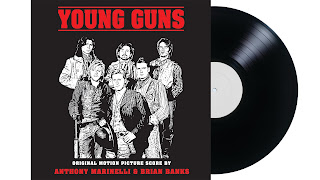 Support this independent record label as they release, for the first time ever, the epic score from the classic 80s film, YOUNG GUNS!

After a lot of planning and hard work, rustedwave.com have acquired the rights to the music from the movie studio.  Now, they need your support so they can release the album and share the brilliant score from this cult classic 80's film.

Released in 1988, Young Guns is an action-packed western that tells the story of Billy the Kid (Emilio Estevez) and the Regulators (Kiefer Sutherland, Charlie Sheen, Lou Diamond Phillips, Dermot Mulroney and Casey Siemaszko) exacting revenge upon the Santa Fe Ring during the Lincoln County War in 1878.  As good as the movie is, the score is what makes it great!

Composed by Anthony Marinelli and Brian Banks, the Young Guns score brilliantly embodies the off-kilter, emotionally unstable characteristics of Billy the Kid, both the man and the myth.  It is epic and powerful, but equally haunting with an underlying melancholy tone.

The album will be mastered from the original recordings and pressed on heavyweight 180 gram vinyl for the enhanced listening pleasure of all audiophiles out there!  It will also be released digitally on iTunes, Amazon and other platforms.

As a special "thank you" reward for certain supporters, they will be printing a LIMITED EDITION T-SHIRT (premium blend, soft comfy tee) featuring the album's artwork.  This t-shirt will not be sold commercially, so you must support the project at this level to get one!

GO HERE to lend your support